Their wedding cards have already gone viral on the internet. But now Chandigarh is abuzz with rumours about the celebrations with cricketer Yuvraj Singh and Hazel Keech set to tie knot on November 30. 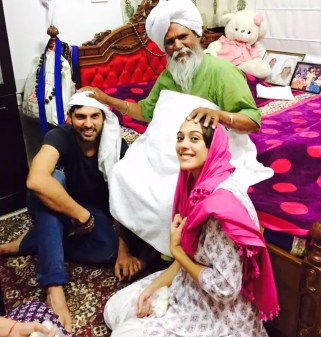 Hazel and Yuvraj have been together for over a year. In April 2016, the couple got engaged in a low-key, private ceremony and they broke the news to the world on social media, sharing a beautiful picture of them together.

Sources close to the family say that the couple is set to host a function at Hotel Lalit in Chandigarh’s IT Park on November 29.

With the Indian cricket team also in the city for their third test match, most star players, including skipper Virat Kohli, besides former players such as Sachin Tendulkar are expected to take part in the wedding celebrations.

Thereafter it is learnt that the couple are to host two more functions in Delhi and then in Goa. The traditional, gurdwara wedding will take place in Chandigarh on November 30 which will be followed by another wedding as per Hindu rituals in Goa on December 2.

A source said,” There are likely to be two ceremonies– one in Gurudwara and one will be Hindu traditional wedding. The family wants it to be a private affair and thus things have been kept under wraps.”

Actress-model Hazel Keech is a British national and her mother is a Mauritian Hindu by origin. Yuvraj’s family is based in Chandigarh and Delhi. Therefore, the two have decided to have multiple venues for the wedding.