Raees is yet another movie on Muslim Mafia Dons and bootleggers for whom Bollywood has special affinity or may be they fund these these movies. Who knows? 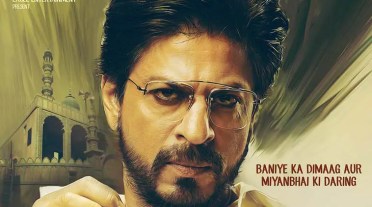 Shah Rukh Khan’s deep voiceover as Raees Alam, an 80s bootlegger in Ahmedabad, works to its fullest in the trailer of this semi-biopic.

Reportedly based on the life of don, Abdul Latif (although the producers have denied this), the movie is set to hit screens on January 25, 2017. And the trailer was worth the wait.

Filmfare award-winning cinematographer K.U. Mohanan’s camera shows glimpses of boats doing their dirty business off Gujarat’s coast, a spectacular overhead shot of a roadroller crushing liquor bottles meticulously arranged in a grid (guaranteed to give nightmares to people with OCD), and Nawazuddin Siddiqui sharing screen space with SRK for the very first time. If you thought that would set your film adrenaline rushing, wait till you get to the point where Atul Kulkarni exchanges metaphorical pleasantries with King Khan.

SRK’s bearded style looks menacing, all the more so when he glares through kohl-lined eyes. There are unabashed theatricals (SRK coming out of a smokescreen cooly as a fight ensues in the background) and over-the-top dialogue (“Gujarat ki hawa mein vyapar hai sahib. Meri saans toh rokhoge, lekhin iss hawa ko kaise rokhoge?”) but it has its desired effect.

Raees Alam’s love interest is essayed by Pakistani actor Mahira Khan, whose nationality briefly got the film into trouble not so long ago. And there’s Sunny Leone doing the obligatory item number, which seems to be a remix of Kalyanji-Anandji’s Laila Mein Laila (from Qurbani) and is interspersed between a lot of bling and bang.

Raees is set to clash with Hrithik Roshan’s Kaabil, a day before Republic Day 2017.