‘Journey of Punjab 2016’ is very different film from Udta Punjab though both are on drugs. 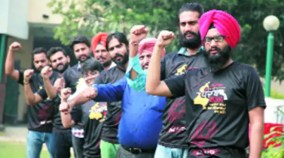 While the big-budget Bollywood film, highlighting the drug menace in Punjab, created waves across India, Journey of Punjab 2016, set for release by November end, is a limited budget movie based on real pain of someone who lost someone close to drug abuse.

The film has been made by Red Arts Theatre Group, by the alumni of Punjabi University, Patiala, which earlier staged a street play ‘Aakhir Kadon Tak’ across schools and colleges in Punjab.

The film not only portrays the evil of drug abuse like Udta Punjab but also provides a hope that you can redeem if only you try.

The movie has been made by the group of theatre artists to reflect the present condition of Punjab. It hopes to inspire the youth of Punjab to live life and tackle the responsibilities and situations.

Made on a limited budget, its star cast includes theatre artists like Rana Ranbir, Anita Meet, Malkeet Rauni and Gurpreet Bhangu along with the students of theatre and members of Red Arts team.

Gurbinder Singh, a promising young kabaddi player and coach got addicted to smack and died on October 30, 2014. Two years later, his uncle Surjeet Singh Sidhu, 59, a college principal has put in all his resources to produce this film highlighting how Punjab’s youth is falling prey to drugs.

Sidhu says how his brother’s son, earning well till 2010 and working as a kabaddi coach in his own college fell prey to drugs.

“The family got him admitted at de-addiction center in Tarn Taran but a month later he was back to drugs. This continued for four years. “In the end, he always said one thing, please save me, I don’t want to die,” says Sidhu, who was emotionally attached to his nephew since childhood.

The film has four Punjabi youths in lead characters who portray Punjab in different shades and is all set to release on November 25.