Last Month, the film makers and others involved in  MSG – The Warrior: Lionheart celebrate the grand success in Andheri (West) Mumbai. According the the industry, the movie’s total collection in the first two weeks itself was around Rs 200 crore despite it being brutally panned by the mainstream media critics. 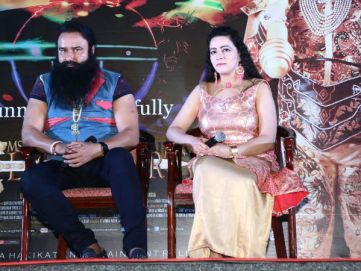 There seems to be no stopping Dr Gurmeet Ram Rahim Singh Ji Insan, who’s coming with the next movie “MSG – The Lionheart – Hind ka NaPak Ko Jawab” to cater to the new-found nationalism across the country.

It’s revealed that ‘Hind Ka Napak Ko Jawab’ will have Dr MSG seen as a Secret Agent, laced with futuristic weapons, all set to take on the enemies.

Most newspaper had termed the film ‘MSG – The Warrior: Lionheart‘ as a promotional documentary, but his fans and followers lapped up the film’s over the top story, acting and … everything. The first movie was virtually a home production with daughter Honeypreet Insan as co-director and youngest daughter Amarpreet Insan as playback singer.

The new film will be shot in exotic locales across India  – Himachal, Rajasthan, Sikkim, Kerala etc. The film will also depict a love angle, along with being loaded with Action and suspense to cater to a wide audience.

MSG – The Warrior: Lionheart has been released on about 3000 screens across the globe in around 5 different languages and seems to have superbly. No wonder, the same team is ready to launch the new movie –  MSG – The Lionheart -Hind ka NaPak Ko Jawab

Take a First Look at the what Dr MSG himself says