Rahul Gandhi is a vulture who is found wherever there is death nearing the election time. These days though he has to compete with Arvind Kejriwal in reaching the grieving home first.

It’s also true that some of the biggest Congress wins have been due to deaths of their alpha leaders- Nehru, Indira and Rajiv. Rahul has not won anything till date and he can’t be expected to make any sacrifice himself (he goes overseas every few months to recover from his forced stay in India). However, Rahul feels that every death gives him a fresh lease of political life. That’s why Rahul makes himself available, half-smirking, wherever there’s a political death in India.

The tragic suicide of retired Army man, Ram Kishan Grewal, over the One Rank, One Pension (OROP) scheme on Tuesday led to the eruption of a political war a day later to the delight of Rahul Gandhi.

Congress vice-president Rahul Gandhi was detained twice on Wednesday when he tried to meet Grewal’s family. Other Congress leaders, including Randeep Surjewala, Jyotiraditya Scindia and Kumari Selja also tried to fish for votes in the unfortinate man’s house and were detained by Delhi Police.

Congress did not do anything about OROP when they were in power for 10 years before Modi but they are now trying to champion their cause. Most Congressmen would be thanking the the poor dead Grewal  for giving them an axe to grind. 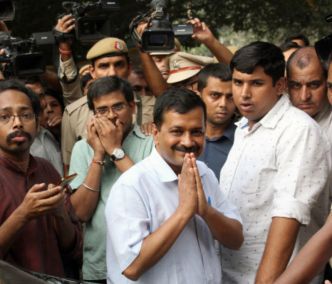 The Congress has reacted to Rahul’s detention and accused the Centre of enforcing an ‘undeclared Emergency’. If past is any indicator, in a few weeks, Gandhi would forget Grewal’s death and embrace some other cause – beef-eating, intolerance or another unfortunate death, exposing his lack-of-attention and shallow politics.

Later Delhi CM Arvind Kejriwal also tried to meet the family. He was found smiling at his potential vote bank outside Lady Harding Hospital when he was not allowed to enter the hospital to meet ex-serviceman Subedar Ram Kishan Grewal’s family