Chief Minister of Punjab Parkash Badal resigned from his post on March 12 after thumping win of Congress in the concluded assembly polls. CM Badal submitted his resignation to the Governor of Punjab V.P Singh Badnore who in turn dissolved the 14th Punjab assembly. 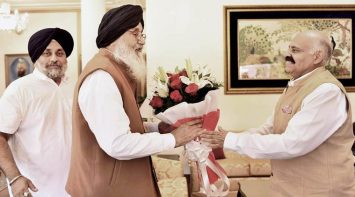 “In pursuance of powers conferred upon me by sub clause (b) of clause (2) of Article 174 of the Constitution of India, I, V P Singh Badnore, Governor of the state of Punjab, hereby dissolve the 14th Punjab Vidhan Sabha with effect from the afternoon of 12th March 2017,” he said in the order.

Before submitting his resignation, Badal held a meeting with his cabinet which took the decision to dissolve the assembly.

Interacting with media, Shiromani Akali Dal’s patron Parkash Badal ruled out any possibility of cooperating with Congress by accusing the latter of treating giving step-motherly treatment to Punjab.

Badal further said that the negative preachment by a rookie party against Shiromani Akali Dal caused the defeat of party in assembly polls. He added that the Shiromani Akali Dal will play a constructive role as opposition in the assembly if it ever found the upcoming Government violating the rights of Punjab citizens.

Shiromani Akali Dal’s President Sukhbir Badal said that the party will introspect upon the reasons which led their party into an extreme downfall. He said that the Shiromani Akali Dal led Punjab government did immense development in Punjab besides facilitating luxury facilities to its citizen but still they faced rejection by Punjab masses.  “We will take corrective measures after thorough introspection the reasons of our downfall,” he added.

Sukhbir Badal further said that there was no downfall in voting count of Shiromani Akali Dal in comparison of the last assembly polls.