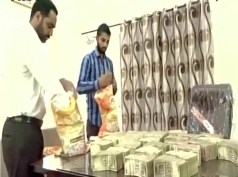 While the poor and honest tax paying people are happy with the the Modi government’s decision to pull Rs 500 and Rs 1,000 banknotes out of circulation, those with unaccounted-for cash in Punjab and elsewhere in India looking for desperate ways to convert their money into white.

Punjab police on Saturday seized Rs 1 crore in the denomination of old Rs 500 notes from two persons at Sardulgarh when they intercepted an SUV.
Gold has been the first choice of those who have hordes of illegal money with them. Some have bought 10 grams for Rs 50,000. However, after IT tax sleuths landed at jewellery shops across Punjab, they are shut now for the time being.

Money-changers in Amritsar, Ludhiana and Chandigarh are very active in providing service to ‘manage’ the black money.

Besides investing in gold, Ludhiana industrialists are buying foreign currency to adjust their black money. Since agricultural income is exempted from income tax, hoarders are buying dollars from the farmers, which they get from their relatives in the US, Canada and the UK, through money-changers, who charge between 25% and 30% of the cut for the entire transaction. The farmers in turn are depositing the cash (old notes) in their savings account.

Hoarders will keep the foreign currency with them till the market stabilises and will later sell it as per the trading value of the Indian currency in the market.

Meanwhile, Ludhiana traders are asking their employees to stand in queues at bank counters and get the scrapped notes exchanged. For an exchange of Rs 4,000, the employees get between Rs 200 and Rs 400.

A hosiery trader in Ludhiana recently purchased around $300,000 from two money-changers for Rs 2.5 crore (in scrapped Indian currency) while the actual value of the foreign currency was Rs 2 crore. The farmers who agreed to sell dollars and money-changers shared the Rs 50 lakh between them.

Vice-chairman of the National Productivity Council Badish Jindal said: “A majority of black money hoarders are paying their workers to stand in queues for hours and get the currency exchanged.”

The wedding season is on. Some customers are making full payments in advance, in soon to be scrapped 500 and 1000 Rupees notes. An owner of a marriage palace said, “While they are accepting cheques, people are insisting on cash payments. People have paid in advance even for the marriages scheduled in January and February”.

“Can we deposit Rs 2.5 lakh in your bank account?” This would sound familiar to many residents as this is what many people are doing. They are approaching friends, neighbours or whosover they can with this request, after the government’s announcement that deposits over Rs 2.5 lakh would be under the scanner.