In a much-trumpeted provision of the 2016-17 Punjab budget, the Punjab government was ‘expecting’ this scheme –  to provide pension to farmers, for the past eight months, only to suffer a ‘miscarriage’ in mid-October when the state finance department declared that the treasury did not have the Rs 80 crore needed to implement it.
Apparently, the state government is going to try again and this time use the mandi board money. 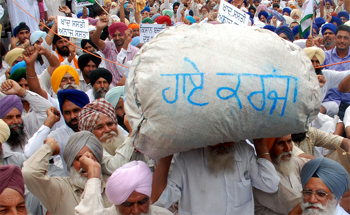 Social welfare has never been on the agenda of the Punjab government – except as a slogan. Punjab’s small and marginal farmers and farm labourers need pensions, but even as these people are numerous and parties need their votes, they are too disorganised and fragmented to wring needed measures from the government.
The state government announced the scheme during the budget session in March, but it was never clear how the scheme would work or who would be eligible. Even at the time of the announcement, people who were familiar with the state’s past record in the matter of social welfare schemes saw little likelihood that the pension would actually reach farmers.
In Punjab, a person owning more than two acres fertile land or four acres barren land is ineligible as are persons with a monthly income of Rs 1,500 or more. Women become eligible at 60 and men at 65. In Haryana, all persons above the age of 60 are eligible if their annual income from all sources together with that of the spouse is below Rs 50,000. Land holding is not a criterion.
The Bharatiya Janata Party (BJP) came to power at the Centre on the slogan ‘achhe din aane wale hai’. Punjab’s ruling Akali-BJP coalition certainly cannot campaign on an ‘achhe din’ slogan. They have had nine years to usher in ‘achhe din’ but unemployment is rife as industries have been lured away to adjoining states that enjoy central benefits. The mafias of the state have tightened their grip and- being trans-party in character -they will continue to flourish regardless of who comes to power. The input-profit squeeze in agriculture has worsened, driving farm incomes down and farm debt up to an estimated Rs 69,355 crore. Pauperisation has resulted in more rural suicides.