Gandhi was not a role model for every one. Some are really against him. There have been occasional protests for more than a decade to the placement of Gandhi statues, around the world including in the US and South Africa. But the University of Ghana is now taking the extreme step to remove a recently erected sculpture.

On Oct. 5, Ghana’s Ministry of Foreign Affairs finally responded to “the campaign to have the state of Mahatma Gandhi removed… on grounds of racist comments,” announcing: “The government would, therefore, want to relocate the statue from the University of Ghana to ensure its safety and to avoid the controversy on the Legon Campus.” 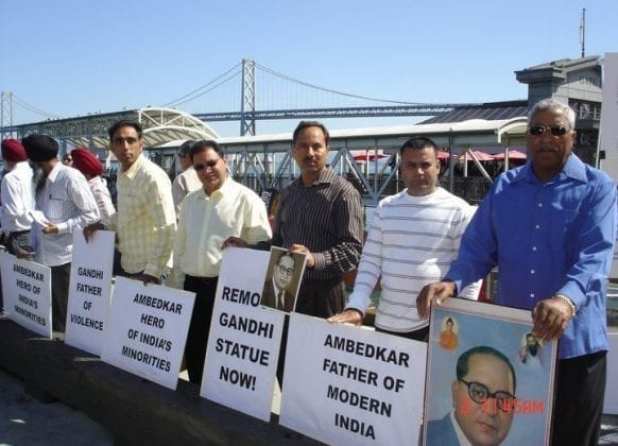 Installed in June during a state visit to Ghana by Indian President Pranab Mukherjee, the statue immediately sparked controversy as university faculty started a petition calling it “a slap in the face that undermines our struggles for autonomy, recognition, and respect.” Nearly 1,800 people joined their names to the petition for removal, which described Gandhi’s “racist identity” as an attorney in South Africa.

“We are pleased that the Ghana Ministry of Foreign Affairs and Regional Integration want to remove the statue of Mohandas Karamchand Gandhi from the University of Ghana campus,” commented the petitioners for removal. “We are sure that as more Ghanaians and other nationals become privy to more recent information on Gandhi’s writings, work, and life, they will conclude, as we have done, that statements attributed to him are not mere allegations and are thus worthy of deep discomfort by all peace-loving Pan-Africanists and Indians who share the ideals of president Kwame Nkrumah and prime minister Jawaharlal Nehru.” 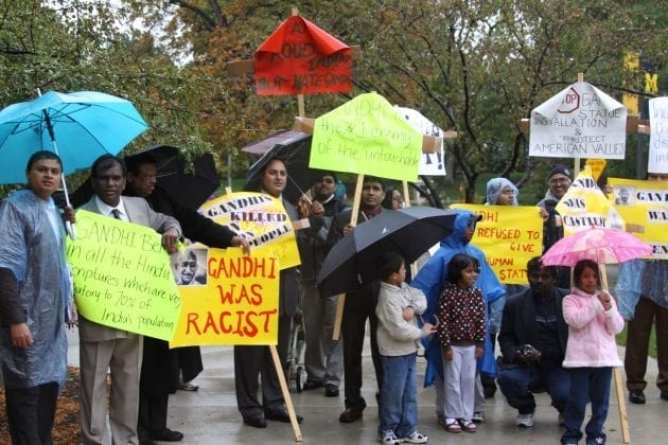 Similar statues are prompting outrage for the same reasons, including in California.

“Banishing the Gandhi statue from the University of Ghana is a historic achievement,” says Bhajan Singh, who recently participated in a demonstration for removal of another Gandhi statue recently installed in Davis, CA. “It’s a victory for truth and freedom. And our hope is that, after this first time in the world that the false prophet has fallen from his pedestal, all educational institutions will follow Ghana’s courageous example by removing every glorification of Gandhi.”

As founding director of Organization for Minorities of India (OFMI), Bhajan has coordinated campaigns since 2008 to persuade people to stop honoring Gandhi. In 2010, he hosted the first protest against a Gandhi statue in the United States, joining a dozen others outside the San Francisco Ferry Building. In a statement, he said: “The popular image of Gandhi as an egalitarian pacifist is a myth. We plan to challenge that myth by disseminating Gandhi’s own words to expose his racism and sham nonviolence.” 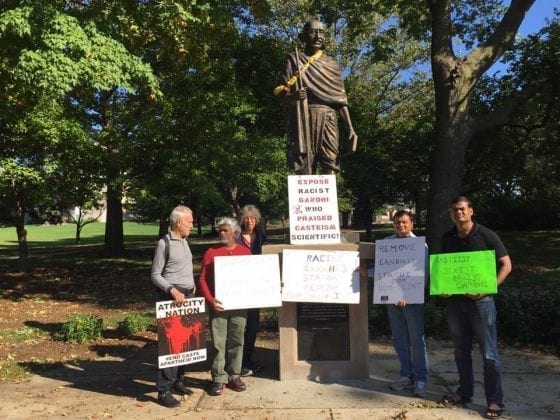 Statues of the Hindu icon have cropped up all across the world since his assassination in 1947. Opponents of the statues often cite connections between Gandhi’s racism in South Africa and support for the caste system in India. In Ghana, for instance, the petition to removal explained: “Gandhi also campaigned against the efforts of the Dalits, the Black ‘Untouchables’ of India, and for the maintenance of the caste system right up to his death.” Today he is known, said the petition, “for his role in the establishment of the infamous caste-like apartheid system.”

“Forcing Gandhism down the throats of African nations by linking food and educational aid to accepting his statues is repugnant,” remarks Bhajan. “Selling Gandhi as an icon of peace spells trouble when he participated in every war in his life, was denied the Nobel Peace Prize five times, and raped his own nieces as an old man. The statue should be returned to India, and we hope African leaders verify its return as they refuse to bow to this racist symbol.”