Why Pilates, Yoga of the West, is getting popular in Punjab and Chandigarh for Fitness

Pilates, also called Yoga of the West, is an exercise form that aims to simultaneously develop flexibility, good posture, strength and balance. Pilates not only builds strength, balance and stamina, but the exercises are safe and highly effective. Pilate is becoming highly popular in Delhi, Mumbai, Chandigarh, Punjab and the rest of India.

Pilate primarily focuses on strengthening and toning the core, by keeping a check on your weight.

Pilates exercises are usually done in a specific order, one right after another. The movements have names, like “The 100,” Criss-Cross,” the “Elephant,” and the “Swan.”

The moves may look simple, but they take a lot of precision and control. It’s not like doing a bunch of crunches; there’s a strong emphasis on technique.

You can do Pilates on an exercise mat, either in a class or at home, using a DVD. Or you can go to a gym or studio that has special equipment, a class, or a trainer who can supervise you.
The first Pilates Studios in Chandigarh was by expat Katja Wollenweber, Germany, who trained in The British School, Sec 44,Chandigarh. Now a number of Yoga Studios provide sessions in Pilates. In Chandigarh one can go to Yog Amore (Sector 16-B), Bodyscapes (Sector 34-A), Exotic Health (Sector 16), Yoga n Beyond (Sector 9). Ludhiana and Amritsar too have a number of Pilates Studios.

Even if you never tried to tone your core, a Pilates workout could be one way to start developing a stronger center. One of the best things about Pilates is it is truly for anyone of any level. Classical Pilates consists of over 500 exercises but they are variations of a few primary exercises. 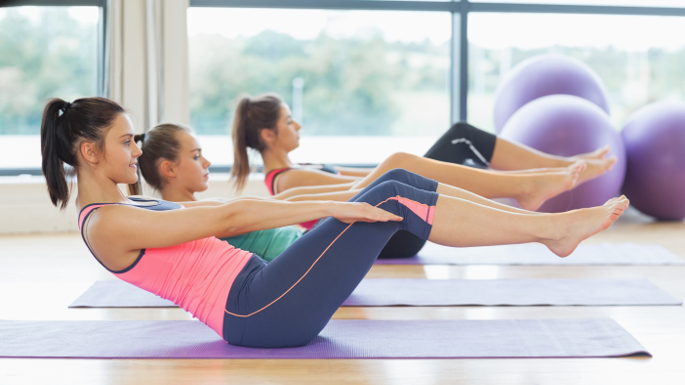 Pilates might imply a expensive studio or fancy equipment to some, but in reality, all you need is a mat. These seven easy Pilates moves require no gear, and are simple enough to try almost anywhere. You’ll find yourself strengthening more than just your core, too.

Pilates is mostly be done on a mat but we also have Reformer Pilates. Reformer Pilates is done using the Pilates reformer machine and is generally more intense and more dynamic than mat based Pilates as it adds resistance to the Pilates exercises via the use of the springs which form part of the machine.

Pilates classes typically take 45 minutes to an hour, but you can do fewer moves in less time.

You’ll get stronger, more sculpted muscles and gain flexibility. You may also have better posture and a better sense of well-being. No Wonder, Pilates is the fastest growing Fitness fad in Tricity and Punjab.