Karachi: Sufism, a tolerant, mystical practice of Islam, has millions of followers in Pakistan but is opposed by extremists. An explosion, by a Sunni militant group, at a remote Sufi Muslim shrine in the Pakistani region of Balochistan has killed 60 people and injured over a hundred, officials say. 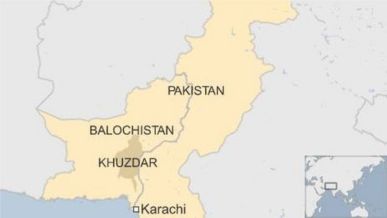 Baluchistan is a restive province where a significant population is against its occupation by the Pakistan and is demanding Independence. The attack may be a crude attempt to blunt the independence movement.

Emergency services struggled to reach the Shah Noorani shrine in Kuzdar. The bombing, believed to have been carried out by a suicide attacker, occurred in the Khuzdar district of the restive province of Baluchistan. Hundreds of worshippers were inside the shrine of the Sufi saint Shah Bilal Noorani, performing dhamal – a trance-like dance – when the bomb hit. So-called Islamic State says one of its suicide bombers carried it out.

“Every day, around sunset, there is a dhamal here, and there are large numbers of people who come for this,” Nawaz Ali, the shrine’s custodian, was quoted as saying by local news media outlets.

The Taliban and other extremist Sunni groups have attacked Sufi shrines and gatherings in recent years. The Sufi tradition offers a tolerant version of Islam that is spurned by extremists like the Taliban.

The Islamic State claimed responsibility for Saturday’s attack, according to a statement released to the local news media. But some Pakistani officials were skeptical of the Islamic State’s claim. They said that its probably a handiwork of the or Lashkar-e-Jhangvi or Jundullah, both anti-Shiite militant groups, crucial to Pakistan’s asymmetric war against India.

Although the Sufi shrine is in Baluchistan Province, it is closer to the southern Sindh Province, and many of those wounded in Saturday’s attack were being sent to Karachi, the port city that is the provincial capital of Sindh.

Mr. Jamal said that Khuzdar and its neighboring districts lacked quality health care facilities, and that the foundation had sent ambulances to Khuzdar to take victims to Karachi.

Pakistani officials condemned the shrine attack and vowed to bring the perpetrators to justice.

On Sunday, Prime Minister Nawaz Sharif is scheduled to visit Gwadar, a deep-sea port the country has built along with the highly controversial China Pakistan Economic Corridor (CPEC) in Baluchistan with Chinese assistance.

Three gunmen burst into the sprawling academy, targeting sleeping quarters home to some 700 recruits, and sent terrified young men aged between 15 and 25 fleeing.

Communication intercepts showed the attack was carried out by the Sunni Lashkar-i-Jhangvi (LJ) militant group.

In August, a suicide bomber targeted the emergency services ward at Quetta’s Civil Hospital killing at least 70 people and leaving scores injured, majority of those killed were lawyers.