A few films have changed the scenario of Telugu cinema, such as ‘Shankarabharanam,’ ‘Sagara Sangamam’, now ‘Ghazi’ has joined their ranks. 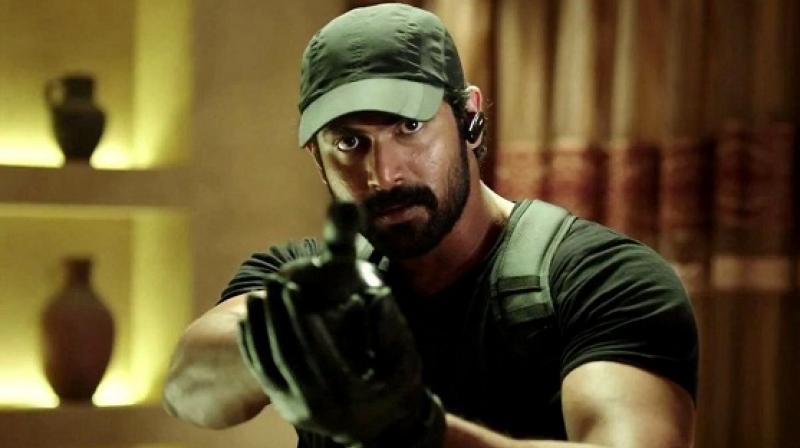 ‘Ghazi’ created much interest and buzz when the promos of the film were released as this is the first submarine war film made in India, and that too in Telugu.

Sankalp Reddy, a first-time director, has based the film on the 1971 incident when a Pakistan submarine PNS Ghazi planned to attack Visakhapatnam, but was destroyed by the Indian warship INS Rajput. The case was classified and no one knows what actually happened.

It’s more difficult to convey the events of a battle from inside a submarine and to get all the emotions right, but with a talented cast that includes Rana Daggubati, Kay Kay Menon, Atul Kulkarni, Om Puri and Satyadev, Sankalp has managed to pull it off.

A few films have changed the scenario of Telugu cinema, such as ‘Shankarabharanam,’ ‘Sagara Sangamam’, and ‘Shiva’ and now ‘Ghazi’ has joined their ranks.

The story is simple enough. The Eastern Naval Command, Visakhaptnam, gets information that Pakistan has deployed a submarine in the Bay of Bengal that is heading for Visakhapantam. INS Rajput, under the command of Captain Ran Vijay Singh (Kay Kay Menon) and Lt Commander Arjun Varma (Rana Daggubati), is sent to intercept it. Both show exemplary courage. An 18-day battle ensues that ends with the destruction of the enemy ship and Visakhaptnam is saved.

‘Ghazi’ definitely belongs to director Sankalp Reddy. Not only are the action sequences credible, but we are kept at the edge of our seats as the narrative unfolds. The director maintains the tempo and creates some excitement, even though the outcome is known.

The dialogue is heavily peppered with Navy lingo, but it’s never boring. The screenplay is gripping and the cast brilliant. Kay Kay is superb as Captain Ran Vijay Singh. Rana Daggubati rises to new heights as an actor in this film, giving the best performance of his career so far.

Atul Kulkarni as assistant captain once again shows his class. Om Puri, Nasser and Milind Gunaji are all adequate in their respective roles. Taapsee hasn’t much of a role.

The music is by K and the background score creates the right atmosphere. The music is the soul of this film.

Madhi’s cinematography is brilliant; Shivaram’s art work is also notable as he recreates the submarine atmosphere. Though graphics are used, they are not obvious

Definitely, ‘Ghazi’ stands on par with many Hollywood films of wars at sea. A must-watch film.