Chandigarh: A hoax bomb call that led to a massive search operation at Chandigarh airport. Dozens of police personnel from Chandigarh and Mohali assisted by sniffer dogs combed the old and new terminals of the airport for an hour after the call, but found no sign of an explosive device.

The search was triggered by a call to the Chandigarh police control room received at 5.30 pm. The caller, a Zirakpur man, said the the bomb had been placed outside the airport but gave no other details.

Chandigarh police immediately alerted their Mohali counterparts and other security agencies following which the search operation was also carried out, ending late in the evening. 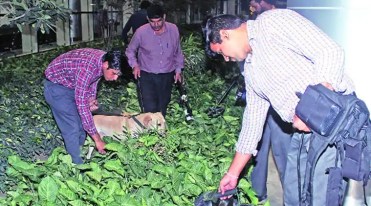 Chandigarh and Mohali police along with dog squads and bomb disposal squads reached at the airport and searched all points including parking lots, waiting areas, departure and arrival gates as the caller told the police that the bomb is planted outside the airport premises. The old terminal in Chandigarh which is managed by the AAI was also checked by the police.

Airport authorities said flights were not affected. “The traffic was normal and the checking didn’t effect the air traffic,” said an airport official.” We conducted our routine exercise after we were informed about the call. Nothing was found inside the airport.”

The caller from Zirakpur was traced through his number that registered at the control room. During questioning, he is said to have told the police that he had got a call about the bomb from a number in Bhopal. Mohali SSP Gurpreet Singh Bhullar said the number from which the Zirakpur-resident claimed he got the information about the bomb was traced in Bhopal.

“He said that he got a call from a Bhopal number. When it was tracked, it tuned out to a number of finance company, who denied of making such call to the Zirakpur man,” said a senior UT police official.

“We took the call seriously and immediately deputed required police force in and around the airport, the security of the other vital defence installations located in the district was also beefed up after the call,” added the SSP.