Following the controversy that cropped up this Dussehra when the YAD activists dismantled an effigy of “chitta” (white) Ravana, which was being given the finish touches, and later set it afire, an arrest of Punjab Youth Congress secretary Parvinder Lapran had been made today.

This Dussehra, the Congress had planned “Chitta” Ravanas as a protest against the sale of heroin/smack in Punjab but had to abandon their plan and also the public screening of Sadhvi Khosla’s documentary “Fading Glory” on the issue of drugs. The controversy over burning of the effigy of white Ravana turned ugly when YAD and Congress activists clashed at GLADA ground near Vardhman Chowk on Chandigarh road on Monday night. 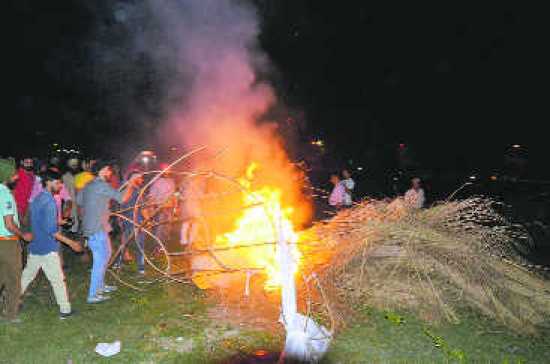 Lapran, who is the son of district party chief (rural) Gurdev Singh Lapran, was arrested from his house in Model Town at 4am. He has been charged with attempt to murder and kidnapping.

While the police booked six Congress workers for an attempt to murder, not so stringent charges were slapped against YAD activists Tarsem Singh Bhinder, Baljinder Khalsa and Sukhdev Singh.

Objecting to Lapran’s arrest, state Congress leadership has decided to protest against the state government and police. Ludhiana member of Parliament Ravneet Singh Bittu and other Congress leaders barged into police commissioner Jatinder Singh Aulakh’s office on Wednesday afternoon and pasted stickers “Proud to be Akali” on the walls. Bittu said they would protest in front of chief minister Parkash Singh Badal’s residence in Chandigarh on Thursday.

Demanding suspension of the Ludhiana police commissioner, Bittu said: “He is working against Congress workers at the behest of Akali leaders. The law and order situation has collapsed in the state where innocent are put behind the bars and culprits are roaming free. YAD activists came to kill us, but they are enjoying police patronage.”

Congress MLA Bharat Bhushan Ashu claimed that the YAD activists came to the GLADA ground and asked them not to burn the effigy on Dussehra. “When we objected, they started beating up our men,” he alleged.

“The police have arrested a member of our party but have failed to act against Akali activists who are issuing statements against us in the media,” said Ashu.