The union territory of Chandigarh was put on alert on Thursday following inputs from the Intelligence Bureau (IB) of a possible terrorist strike.

Confirming the development, Chandigarh’s Home Secretary Anurag Aggarwal said: “Yes, we have got an alert from IB in this regard (terror strike).”

“We have asked the Chandigarh Police to take appropriate measures. We have sought cooperation from city residents to be alert and inform police about anything suspicious,” he said.

This progression took place after some local residents claimed they sighted the suspicious movement of six persons in Army uniform in the vicinity of the Mohali airport here. The Mohali police were on their toes the entire day today, combing operations in the area around the airport till late in the evening. Later, Mohali Senior Superintendent of Police Gurpreet Singh Bhullar claimed that the persons in question were Army personnel and were moving in the area as part of a military exercise. 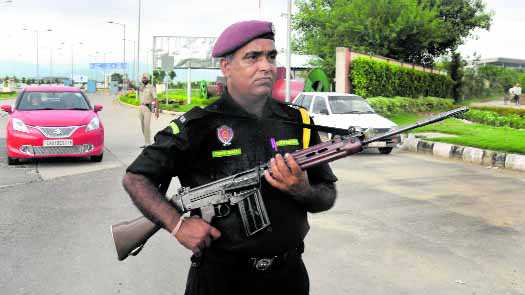 “It has been confirmed that the persons were Army officials, not anti-social elements. A military exercise was going on in the area and they were here for the purpose,” said the SSP.

Earlier, high drama was witnessed in the area as a large number of policemen were deputed in villages located near the airport. Special nakas were laid and certain areas were cordoned off for the combing operations.

Following last week’s surgical strikes by the Indian Army on terrorist launch pads across the Line of Control (LoC), the border states of Jammu and Kashmir, Punjab, Gujarat and Rajasthan have been on high alert.