3 holy scriptures of Guru Granth Sahib blazed in a fire!

Three holy scriptures of Sri Guru Granth Sahib Ji and 1 dozen Gutkas (Gurbani Scriptures) were reportedly found burnt in Gurdwara Sahib of village Gama Murada near Makhu this past night.  The news spread quickly across the Sikh circles leaving the Sikhs in extreme distress due to the Gurbani sacrilege. 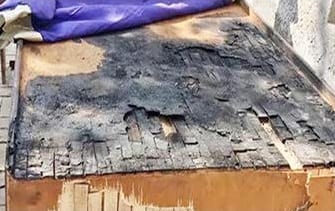 Prima facie reports reveal that the short circuit in the fan installed above Sukhasan Sahib of Gurdwara sparked and the sparks led the Chandoa Sahib to catch fire. The Holy Scriptures of Sri Guru Granth Sahib and more than 10 Gutka Sahib (Gurbani Scriptures) were burnt in the fire.  Sikh masses have found clues of short-circuit in the wires of fan installed in Sukhasan Sahib.

Guru Granth Sahib Satkar Committee activst Bhai Rachpal Singh who was present at the spot informed MahaPunjab that inconsistent mesh of high voltage wires in villages often causes voltage fluctuations which in turn lead to short circuit incidents in the village.  He however ruled out possibility that the incident could have taken place due to pre-planning.  He asked local police officials to investigate the incident thoroughly.

The damanaged saroops were taken to Goindwal Sahib to cremate the Holy Scriptures and Gutka Sahib.